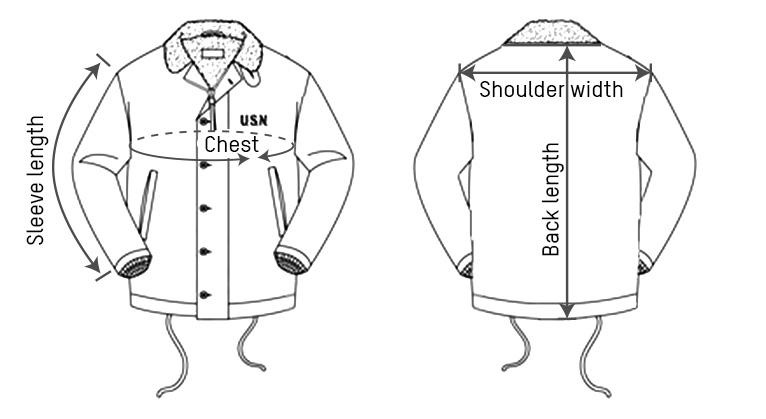 How to measure yourself for jacket ordering.

Please let us have the following 5 measurements before you order.

3. Your Chest circumference (wearing a t-shirt only).

Use a measuring tape and measure around your chest (at nipples level).

With the arms relaxed and down at the side, measure around the shoulders just above the biceps. (Don’t take this measurement yourself, ask somebody else to help you so that you have both your arms down at the sides during measurement).

The N-1 jacket was introduced around 1943 as part of the Navy's new and improved line of special and protective clothing. The jacket construction requirements were covered by specification No N: 37-J-3 INT according to which it was a hip length jacket the shell of which was made by a heavy corded cotton grosgrain, a very tough fabric, more commonly known as jungle cloth. It was lined with alpaca wool which extended to the collar and it also featured two slanted pockets, a draw-string skirt, wool storm cuffs and a hidden chinstrap. The closure was zipper and it also had a buttoned flap for extra wind protection. It came in three colors, initially in navy blue, which was replaced by olive drab shade no. 3, and finally olive drab shade no. 7.

It was tested by the Arctic and Cold Weather Coordinating Committee of the Office of the Chief of Naval Operations at Point Barrow, Alaska, for use by shore based personnel and was found to be satisfactory during moderate cold.

The N-1 was issued to Naval ground personnel serving in the Temperate, Cold and Arctic Zones to insure adequate protection under the various climatic conditions. It saw heavy use in WWII onboard ships and ashore and although the latest specification MIL-J-20026 - JACKETS, TROUSERS, AND HELMETS, WINTER, N-1, was canceled in 1951, it was used also in the Korean war and until the 1960s when was withdrawn.

We offer a high quality reproduction of this timeless piece of military outerwear in two versions. A rare contract of 1944 lined with 50% alpaca and 50% wool and an early 1950s version with the thick stripe jungle cloth lined with 100% alpaca.

What are you looking for?